Brinner!  It’s one of my favorite meals to make!  My friend Kara has informed me that brinner is a colloquial midwestern thing so just for clarification, brinner is breakfast for dinner.  And it’s great!

I made an old favorite and a new favorite for brinner.  The first was a crustless quiche with as many veggies as I could squeeze in.  The second was Danielle’s Grain-free Apple Spice Cofee Cake.  It was so delicious!  Dense and moist, better than the best bakery.  I made it without the coconut glaze because I couldn’t find any coconut milk without the guar gum.  Companies add it to keep the milk from separating but it’s a Sdkjfdkjg for people trying to follow the SCD.  I’ll admit, I ate a whole slice (and a half) before I mustered the necessary self-control to actually take a picture of it.  Reason #472 why I can never actually be a hipster.

Ok, the quiche.  The basic recipe is as follows:

whip these two ingredients together and add salt and pepper to taste.

Ok, but here’s the deluxe version:

1 cup kale- chopped without the branches

Add these ingredients after you have whipped the first two.  Save the bacon grease and use it to grease the pan.  It infuses the whole dish with the sweet, salty taste of bacon.

Pre-heat oven to 350 degrees and cook for one hour.  Use foil on the edges to keep them from burning. 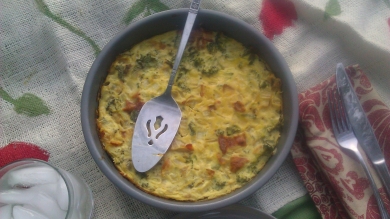 All in all, it was a dining success!  My sister told me I needed to add pictures of people enjoying my food (I assume so everyone knows it was actually edible).  My two favorite recipe bunnies sat with me in the fading light of this summer day and between the three of us, we demolished almost everything!  There was definitely a point during the last third of the coffee cake when my husband and I looked at each other across the table and agreed to finish it instead of saving it.  High-fives for occasional indulgences!

The last piece of coffee cake!