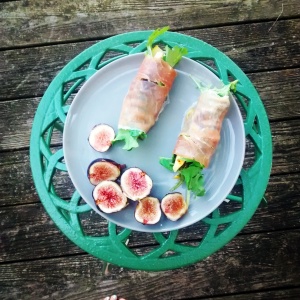 After a long summer, I’m headed back to my second year of grad school.  One of the best things about summer has been having the time to garden and cook!  Now that the crush of the school year is upon us again, I’ll be making a lot of these quick, easy wraps.  These prosciutto wraps are yummy, surprisingly filling, and so quick to make!  With the ingredients on hand, I can make them in less than five minutes.  Served with fresh figs and homemade refrigerator pickles, it’s the perfect summer meal.

1/4 of a small avocado cut in slices

A handful of lettuce

1.) Spread mustard on the slices of prosciutto.  Assemble pickles, avocado and cheese on one side of the prosciutto and roll it up.  Enjoy!

Rhubarb has made its grand entrance at my local farmers’ market. I brought home a small bundle and set about making them into something delicious. When I was a kid, we used to have a bunch growing in our backyard. … END_OF_DOCUMENT_TOKEN_TO_BE_REPLACED

Since getting a new grill for my birthday, Mike and I have been grilling something or other almost every single night! This salad is quick, easy, and incredibly delicious!  Start to finish, it takes me less than 20 minutes to create and has become a go-to in our house for weeknight meals.  The Sesame Ginger Vinaigrette is delicious and I usually make extra to carry with me in my purse for lunches out. 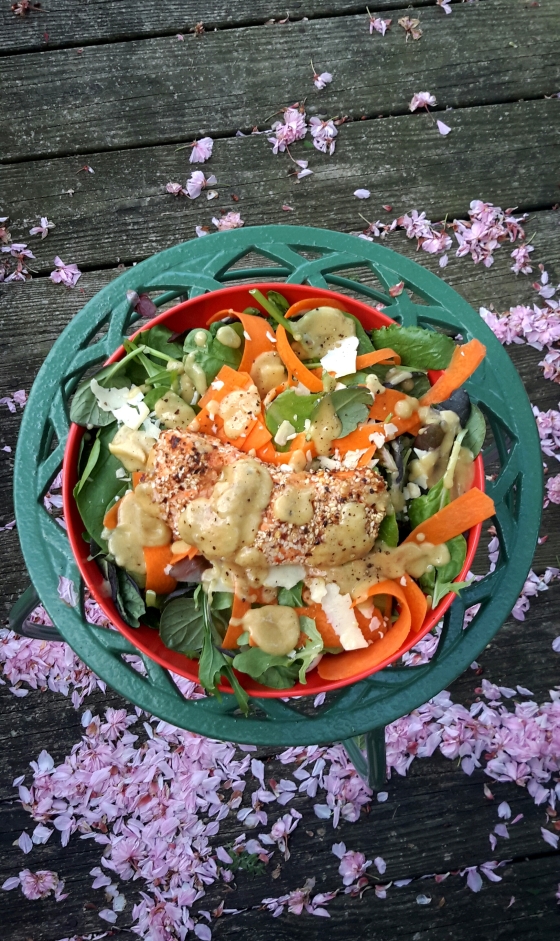 1.) Place all ingredients into a container and blend.  I find that my immersion blender whips up the creamiest version of this vinaigrette that won’t separate.  For a more traditional vinaigrette, grate ginger and mince garlic and then emulsify.

2.) Mix greens with shaved carrots.  Shave romano cheese over the top of the salad.  Set aside.

4.) Grill on both sides for 5 minutes.  Depending on how hot your grill gets, it should be medium rare in the middle.

Once again, it’s been a long time since I’ve posted but I wanted to post some pictures of the incredible grain-free Strawberry Shortcake that I made for my birthday!  I used the recipe last July for some patriotic triffle and was excited to see that Jenni, over at the Urban Poser, had made it into a cake as well. 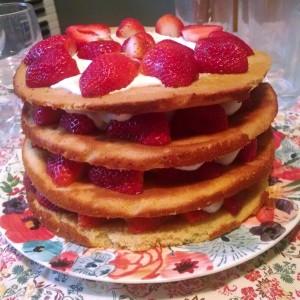 It was incredible and does not taste grain-free at all.  It’s dense, like a lot of coconut flour recipes, but very moist, sweet and the coconut whip cream gives it a sort of airiness.

I used 9 inch pans so my creation did not turn out as ethereal and lovely as Jenni’s but it was mouthwateringly delicious and a definite crowd pleaser.  Find the recipe and instructions here!

Without a lot of fuss, pomp, or circumstance, I have recently passed a large milestone in my personal history.  As of May 1st, I have been 1 year on the Specific Carbohydrates Diet.  I can’t believe it has been a full year.  I have been flare free now for nine months.  As short as it is, that is a victory for me.  In June, I start decreasing my medication intake to see if my body is ready to start relying fully on the diet.  For now, I am just so grateful to be well.  On May 2nd, I took my company’s annual wellness assessment.  For the first time in three years when asked “How would you rate your physical health?” I answered “Very Good”. 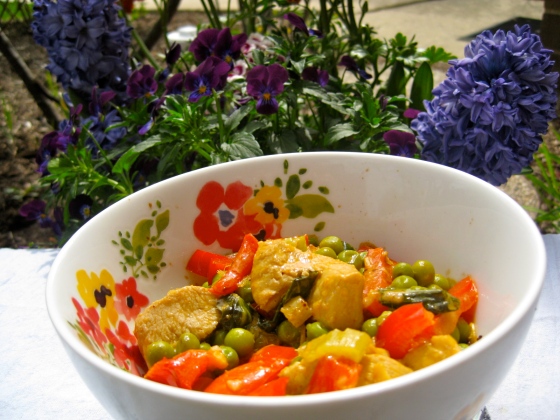 This recipe is for your traditional Thai Red Curry.  I was inspired by memories of nights in Chicago eating at Cozy Noodles, an eclectic Thai Restaurant on the north side.  I am elated at how it has evolved and turned out.  Creamy and sweet, with subtle heat and a plethora of vegetables.  I started out with a recipe from Eat Live Run but adapted it to fit the SCD diet.  The original recipe includes sweet potatoes, sugar and fish sauce.  I left out the sweet potatoes and fish sauce and substituted 1 TBS of honey for the sugar.  It was great!  We like to serve it over cauli-rice but it makes a nice soup as well.  I made the Thai curry paste from scratch and have included the recipe.  Enjoy! 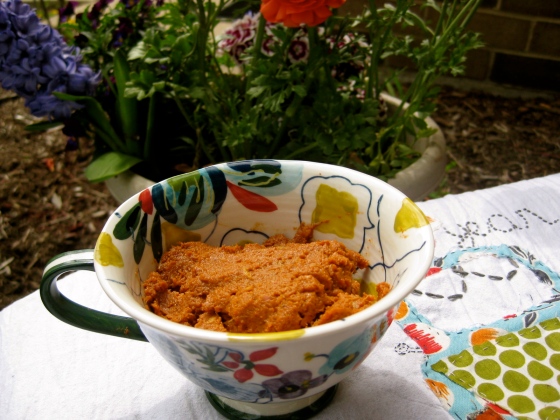 This delicious savory, spicy and sweet chili is the culmination of over a year of fairly tragic SCD legal chilis.  No really.  Everyone send Mike an air-five for being a champ and eating burned, bland, s0-hot-your-nose runs, oh and did I mention bland, chilis.  However, by painstaking trial and error, I have created the BEST chili recipe!  It reminds me of Fresh Fields chili, if anyone remembers the tiny yet incredible diner, in tiny yet incredible Stillwater, Minnesota.   Hands down, this is the best SCD/Paleo chili I have tried.  I started with this recipe from Paleo Pot and it evolved from there.  Credit where credit is due, the Paleo Pot recipe was great but not sweet or substantial enough for an entire meal.

So far we have served it a bunch of ways- plain, over spaghetti squash, over cauli-rice, with Roost Blog’s Almond Thyme Crackers, with onion and avocado, with cheese, etc.  Try it out and let me know any fun new combos! 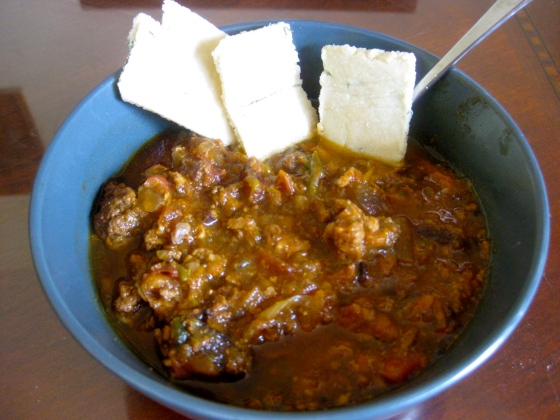 Sweet and Spicy SCD/Paleo Chili Recipe:
2 Bell Peppers (1 Orange, 1 Yellow is my favorite)
1 Red Onion
1 Yellow Onion
1 Jalapeno pepper (Leave half of the seeds in or adjust according to heat preference)
1 lb. Ground pork
1 lb. Ground sirloin
1/4-1/2lb. bacon
4 cups diced tomatoes
1/2 head of garlic (5-6 cloves)
1 TBS Cumin
1 TBS Cayenne Pepper
1 TBS cocoa (optional- remove to make SCD legal)
1 TBS salt
1 tsp black pepper
1 tsp red chili flakes
1/4 cup honey
1 cup red kidney beans (pre-soaked according to SCD specifications)
1 cup water
Instructions:
1.) Heat oven to 425 degrees.  Line a cookie sheet with parchment paper and place bacon strips evenly.  Cook for 9-12 minutes until finished cooking.  I love cooking bacon in the oven because it cooks evenly but feel free to cook in the skillet as well.
2.) Brown the pork and beef.  Strain the fat and set aside.
3.) Cook all of your veggies to roughly the same size.  It doesn’t have to be perfect because you’re going to put half of them in your food processor or blend after cooking.
4.) Combine the spices in a separate bowl.  Add all of the veggies, beans and meat to your crock pot.  Add the water, spices, and honey and cook on low for 8 hours.
5.) Remove the top and stir to combine.  Take roughly half of your mixture (about 5 cups) and blend it in your food processor.  Add the un-blended portion to the blended portion and stir to combine.
6.) Serve and enjoy!  We like it with avocados, served over spaghetti squash, with grated cheese on the top or just plain.  Yum!

February is hands down, the worst month of the year for mid-westerners.  It manages to simultaneously never end and speed by, giving the poor chump stuck in a mid-west induced haze of flu, stress, and blizzards, the feeling of slow motion whip lash.  You know it’s happening, but you can’t do anything about it.  Mid-westerners, we are the true survivors. 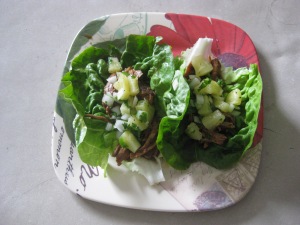 Fortunately, February also gives me this frenzied craving for all things tropical.  I window shop for dresses without sleeves and blush inducing lengths.  At work, I keep my sanity while holding on the phone by clicking on EVERY SINGLE travel “get-away” package that I see.  And I make a series of tropical inspired dishes that give me the illusory feeling of controlling my own destiny.  Maybe if I eat enough pineapple. I too will win Travelocity’s “Romantic Caribbean Get-Away” sweepstakes.

It hasn’t happened.  But March is here.  It’s sunny today and I am happy to post pictures of mouthwatering Caribbean spiced pork turned mid-western by virtue of the crock-pot.  I snagged the recipe off of paleopot.com and was glad I did.  The sweetness of the pineapple and the heat from the chilies made me ignore the blizzard outside.  I was so absorbed in the meal I didn’t even notice the snow plow, dutifully stacking snow around my little Vibe, making it impossible to leave. 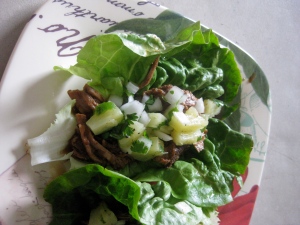 This is the part of the story where the hero decides that enough is enough and it’s time to kick some butt!  If you like that part of the story, read on.  Disclaimer, I am the hero in this story.  Well, me and my kitchen aid mixer but that’s a given.

When I started the Specific Carbohydrates Diet back  in May 2012, I was used to eating lots of creamy, delicious dressings and spreads and I was determined that changing my diet wouldn’t change that.  This was illogical for a number of reasons, the biggest being that I was brand new to this kind of cooking and pretty unconfident in the kitchen.  Still, two weeks in I decided to try a ranch dressing that called for 1/2 a cup of mayo.  The result was a running, eggy tasting mess and a sugar-withdrawal, prednisone induced cry.  About a month and a half later I tried a garlic aioli.  Aioli is mayo made with olive oil.  The running, non-cohesive result led me to the conclusion that mayo was not in my wheelhouse and that I should stick to apple cider vinaigrette.

This February, a promotion at work has left me scrambling for time to cook.  I think I have been more of less living off of almond thyme crackers and cheese.  And, the salad bar at Whole Foods where the most delicious tuna salad in the whole world gave me the courage to try again.  Here is how I did it. 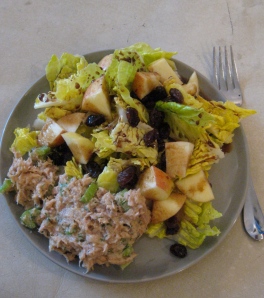 *I know there is a lot of debate in the SCD community about canola oil and its safety.  If you have concerns, feel free to substitute peanut oil or olive oil.

So creamy!  So fluffy!  So delicious!  And best of all, it enabled some truly awesome meals this week!  First out much further ado:

I followed 101 Cookbooks recipe for Egg Salad and served it with Almond Flour and Thyme Crackers.  It was great!  I would have loved it on cashew bread as well. 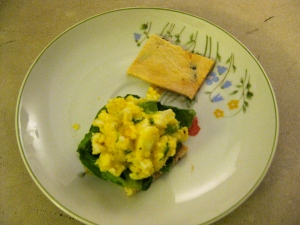 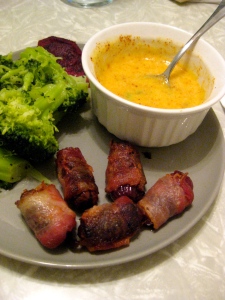 1. Blend all mayo ingredients together and chill.  Delicious!

2. Cut 5 strips of bacon in half.  Wrap ten medjool dates in the bacon and cook for 30 minutes at 350 degrees.

To conclude.  The hero succeeded and was not defeated by soul-less food and made many delicious dishes and lived happily ever after.  The End.